We actively continue pursuit of our New York Federal Permits, refining species and participating in detailed analysis of our site selection. At present, Manna is on course to operate one of the first federally permitted offshore fish farms along the East Coast.

NOAA/NOS/NCCOS/Marine Spatial Ecology Division, has completed an Alternative Site Analysis for our New York site, looking closely at Manna’s proposed location approximately ten (10) miles offshore. The thorough report will be uploaded to our website shortly. Utilizing the latest marine spatial planning tools and computer data sets and overlays, a close and careful analysis of the Manna Fish Farms’ New York proposed offshore site has been completed. The NOAA/NOS/NCCOS study shows that the Manna farm site proposed is in the least impactful location, with negligible potential conflict. We are currently in the process of coordinating public outreach meetings to share the details of the analysis process and explain the comprehensive report. 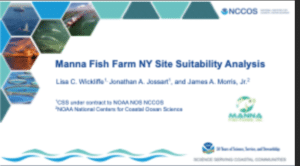 Manna’s New York Offshore plans entail four (4) phases of development – with a total of eighteen (18) submersible net pens to be installed by the end of Phase IV, during a five (5) year build out, with full deployments estimated by 2030. Phase I will study two (2) submersible net pens as proof of concept, followed by two (2) – four (4) net pens added incrementally in the following years, until full build out is reached. 100% Transparency of our environmental monitoring is committed.

Our proposed NY site is approximately ten (10) miles south of Shinnecock Inlet, Hampton Bays, New York. The three hundred and ninety (390) acre site is in approximately 130 feet of water and within the United States Exclusive Economic Zone. Manna is currently involved in stakeholder engagement and outreach, along with operational planning, including development of our land-based facilities. Upon receipt of our NY offshore permits, we will start with two (2) submerged net pens as a proof of concept. We will add net pens two (2) – four (4) per year/annual phases, maintaining 100% transparency throughout. Our transparency will share and ensure that we have no negative impact upon the water quality, native wild fish stocks, and the benthic environment.

MFF outlined the parameters of the baseline environmental survey (BES) based on what was required for the Gulf of Mexico study, and contacted the applicable Federal and State agencies for confirmation. We received comments from the EPA in May 2021, and revised our survey plan accordingly. MFF is now in the process of finalizing the BES plan with applicable agencies, and consulting with surveying companies to confirm costs. Once the survey company is identified, we will proceed with the study. Upon receipt of the BES report, we will perform a precision siting analysis for the farm using the hydrographic and geophysical data obtained during the survey. After finalizing the farm details, MFF will submit permit applications on or about Summer 2023. A NEPA analysis will then be performed, and once complete, public hearings will be held, followed by baseline benthic analysis and baseline water study. We are currently planning for this between Summer of 2024 and Spring of 2025, which would enable us to commence our offshore operations on or about Summer of 2025, provided permits issue by Spring of 2025. In that case, we will expect our first New York harvest in Summer to Fall of 2026. In the event that we are delayed in receiving our permits, then we will shift out plan to anticipated first harvest in Spring of 2027.